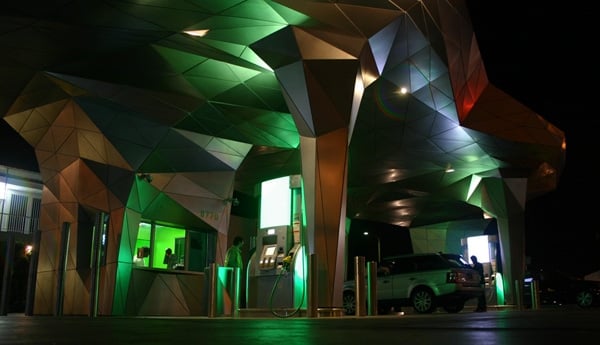 This location is no longer maintained in Roadtrippers. Please confirm location details before visiting.

“gas station of the future”

"The Helios House is a gas station in Los Angeles, located on Olympic Boulevard. It is designed as a green station with special features and is considered to be the "station of the future." It is the first gas station in the United States to be submitted for LEED certification. The gas station was designed by Office dA in Boston and Johnston Marklee Architects in Los Angeles. The architects were hired by Ogilvy & Mather, led by Brian Collins. The purpose of the design was to reinvent the gas station.The station's roof is designed of triangles made from recycled stainless steel and contains cacti and 90 solar panels. This reduces the energy consumption of the station by 16%. The station's roof is drought tolerant and collects water for irrigation.Built in 2007, it is seen as a Los Angeles landmark. It started out selling BP branded gasoline, but in 2010 switched to ARCO." -Wikipedia

BP had real vision when it built this place. ARCO has turned it into a sad joke. There is very little left of the original spirit of leadership in conservation. But their worst crime by far is... Read more

Reviewed by
Gregg B.

This place should get five stars for looking so freaking cool and their prices are pretty good but I give them three stars because: Pulling in and out of this place is very tight and is an... Read more

The coolest gas station around my neighborhood is getting my review. They take credit cards and APPLE PAY without a surcharge and their prices and location are hard to beat. There are two gas... Read more