Created by RoadtrippersCanada - May 12th 2018

Do you like snow? Do you like awe-inspiring natural beauty? Have you heard of the Aurora Borealis? If you answered yes to any of these questions, Yellowknife, capital of the Northwest Territories, is the place for you. There's so much to do in what was once Canada's furthest frontier.

What started out as a boom town in the Thirties for gold miners is now a thriving city and a great vacation destination for those who want to see the Northern Lights, fish, ski, eat great food or just take in the culture of Canada's largest and most perpetually frozen province.

Bonus: It doesn't snow ALL the time in the NWT. In fact, the extra daylight the subarctic region receives in the summer has led to hotter temperatures recorded there than in Hawai’i! 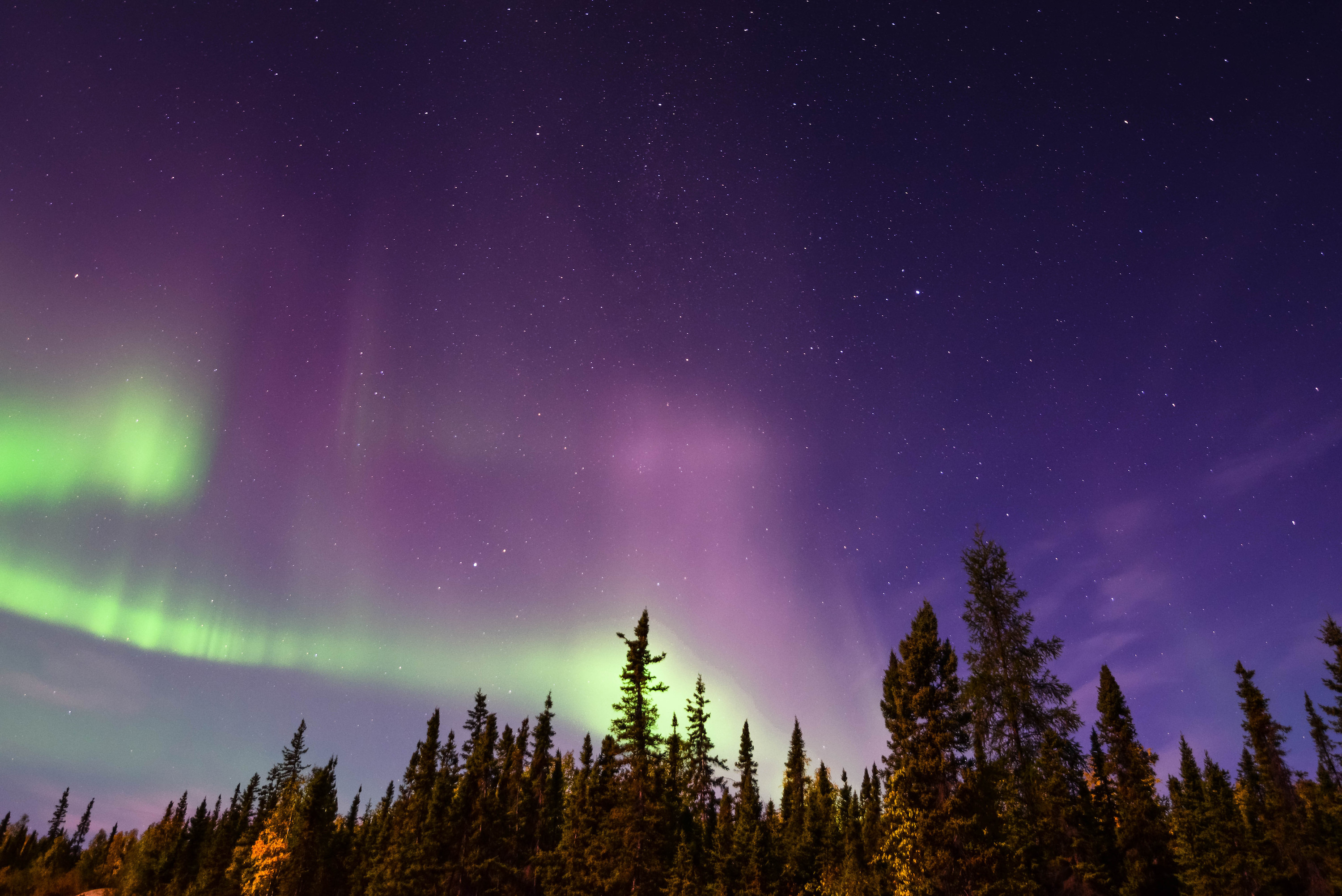 Any textbook will tell you that the Aurora Borealis is the result of an electrical discharge interacting with gases in the atmosphere and enhanced by the magnetic poles to create wavy streams of light; but no amount of cold, hard facts or even photographs can compare with seeing the ethereal curtains of green and red shimmer and swirl in the night sky of the snowy north in real life. And what could be better than experiencing such celestial majesty than in your own cozy teepee? They’re not real teepees, but heated and comfortable viewing tents scattered around a flat plain with rotating seats for maximum viewing. The local village has a lodge where you can sample First Nations and locally-inspired cuisines like bison, reindeer, whitefish or pike nightly. There are B&Bs and hotels all over the area with relatively easy access to the village proper. Join a guided tour or go it alone, it’s up to you. Premium winter clothing is available to rent and is even delivered to your room! This is it, people... the prettiest parts of Skyrim, but for real!

Pro Tip: The optimal times for viewing the aurora are between mid-August through September, or from mid-November through April.

Here’s a fun fact to throw around at parties: There are more freshwater lakes in Canada than there are in the rest of the entire world combined. One of the biggest is the Great Slave Lake, a longtime ‘middle sea’ for the First Nations peoples in pre-Columbian times and a major source of both fresh water and commercial fishing to this very day. There are dozens of campgrounds around, and it connects to Yellowknife via the Yellowknife Bay, home of bright, world-famous houseboats that are a sight to behold all by themselves! The Lake is home to hundreds of thousands of Caribou and Bison that roam its shores freely as they have since time immemorial. Viewers of “The Terror” on AMC will note much of the lake had previously been explored by the lamented Sir John Franklin “the man who ate his boots”. It may go without saying but the kayaking, paddleboating and sailboating are sublime, as are the many, many rivers that feed into the lake if you enjoy whitewater rafting or just hiking.

Narwal Northern Adventures offers a variety of fantastic tours (like hiking, canoeing, and fishing), but our favourite experience is their Dinner Theater Cruise. Sit in a 9 meter canoe and eat a hot meal, have a cold brew and watch some impressive interpretive performances of local history and indigenous culture while floating atop Yellowknife Bay. The Narwal Northern Adventures put on their shows on Thursdays from June through August every year. This unique and amazing experience includes the traditional Northern Territories meal of Soup and Bannock. Each tour is different so multiple outings are very tempting.

As mentioned, Yellowknife began life as a boom town in the early 1930s due to the striking of gold in them thar hills. The Old Town quarter has retained the charm of that era. One of the main drags is actually literally named “Ragged Ass Road,” which intersects with Franklin Avenue (another remembrance of the late Sir John Franklin of Arctic exploration fame.) The road is proudly unpaved even to this day.

There's serious charm in what novelist Kathy Reichs describes as the “Northern Hodgepodge” architecture of Old Town. Take a guided or audio tour and learn something about old time gold rushes, diamond mine strikes, and crushing economic depressions, perseverance, hardiness and the Great Northern life. Old Town is also home to some of the best eating in the city, such as the Wildcat Café and Bullock’s Bistro.

ProTip: Don’t forget to pick up your own “Ragged Ass Road” sign as a souvenir!

Inside the awesomely named Hidden Lake Territorial Park, the Cameron River Falls trail is a moderately challenging hike that's ‘a bit of work’ to navigate but is considered well worth the effort. Whether the falls themselves are flowing or whether they’re frozen solid, they're breathtakingly beautiful. Especially if you're intrepid enough to parka up and do the hike in the late autumn or dead of winter, so you can experience the Northern Lights above the glossy and imposing waterfalls (not recommended for amateurs). There’s also plenty of rock climbing opportunities. One pictures the North as barren tundra but it simply isn’t so, there's actually a ton of biodiversity in the Northwest Territories, so keep your eyes open for beavers, muskrats or even bears on the 1.2km trail.

There are roads made up entirely of ice around Yellowknife, and these offer many opportunities for snowmobiling or dog sledding. There are several places that can set you up with the equipment (or canines) necessary to take up such an endeavour. These activities are particularly fun in the winter when Great Slave Lake and the surrounding lakes freeze over.

And don't forget about dog sledding! The dogsled used to be the primary mode of transportation in the frozen plains. They were swift, fish scales would be attached to the skids of the sleds, and then covered in ice, and at night, the driver would snuggle up to their dog teams for warmth.

Bonus: You can even do a day trip Ice Road Trucking, just like the TV show!

Bonus Bonus: You can even schedule an ice-fishing excursion with the local agencies and try your hand at pulling whitefish and pike from holes in the ice just like they did on North by Northwest!

The Wildcat Cafe is famous, and it looks like a log cabin. Located in Old Town, the restaurant was established during the 30’s gold rush along with the rest of Yellowknife and it has maintained that rugged frontier aesthetic. The restaurant is also a cultural heritage site as well as being one of the most popular eateries. Since the joint was first opened under Willie Wylie and Smokey Stout, the Wildcat has had as turbulent and interesting a life as the city in which it lies. You get a great view of the Back Bay from the restaurant so you can see the seaplanes zooming up and down as you enjoy your meal.

Pro Tip: The Restaurant is the oldest operating eatery in Yellowknife, but please plan ahead, it is only open in the summer.

As the name implies, this place is dedicated to the culture of the North, be it European explorer, migrant, First Nation, Eskimo, you name it. Mostly, it’s a must-visit museum for anyone traveling up to the Northwest Territories. There are incredible collections of artifacts and artworks including exhibits of indigenous modes of life from whaling to building igloos. There are hands-on sections for kids of any age which really brings to life the lessons of the past. Fancy yourself an explorer in a British Arctic expedition? Or do the throat-singing and parka-wearing, dogsled mushing Inuit more spark your imagination? Either way, there's something to discover at the PWNHC.

FUN FACT: The Museum is named for Crown Prince Charles as he officiated its opening back in 1973.

There's loads going on in Yellowknife, depending on what time of year you visit:

"Folk on the Rocks" Festival

Since 1980, Yellowknife has played host to one of Canada’s best outdoor music fests. From the opening party “Warm the Rocks” on the Shores of Long Lake, it has expanded from folk music, and is now a premier destination for bands of many genres from all over Canada. There’s a children’s section and a full on beer garden! Of course, there’s plenty of local flavour to the festival, with food and artwork for sale. The festival runs every summer.

Remember the film “Die Another Day” starring Pierce Brosnan as the charming James Bond (it’s the one with the much jeered-at invisible car)? Do you also remember the sweet Ice Palace in that movie? The one melted by the Icarus Space Weapon (spoilers!)? Well, every year in Yellowknife, they hold the Snowking Winter Festival where they build an honest-to-God Ice Castle to hold it in! it’s full of ice sculptures, cafes, slides, mazes, you name it, each year they design it differently. The festival takes place every March on the frozen surface of the Great Slave Lake itself.

So get your Queen Elsa on at one of the ice sculpture and snowman contests, children shows, rock and roll concerts, hockey matches, throat singing performances or craft sales. And those are just some of the fun to be had. Don’t forget to high-five the Snowking himself when you see him.