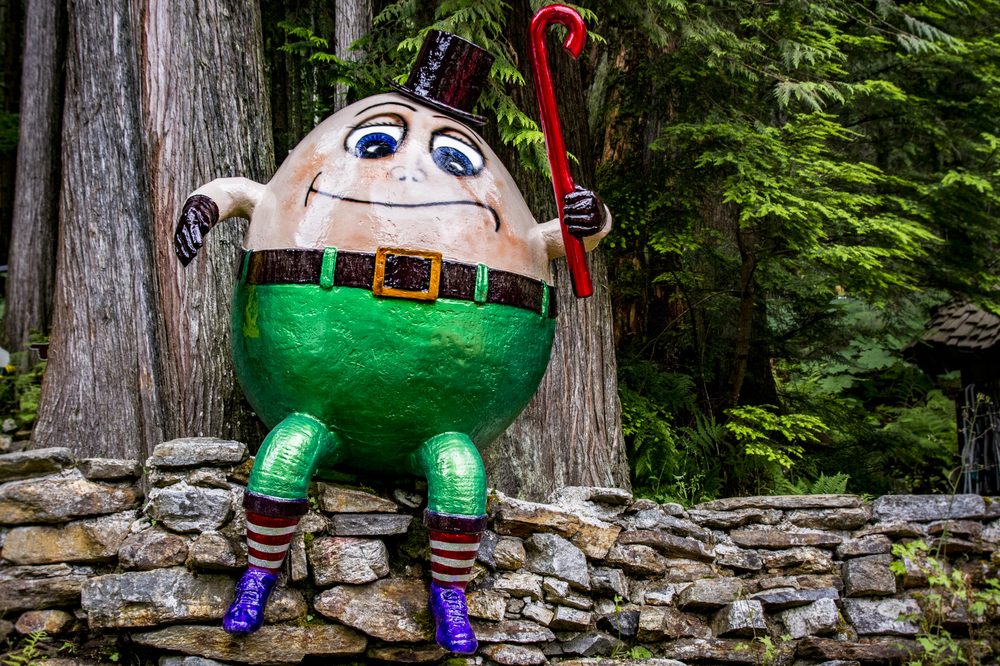 “climb up an epic 3-story treehouse!”

Step back in time and into another world… the world of The Enchanted Forest.  Doris & Ernest Needham started The Enchanted Forest as a lifelong dream and retirement project during the 1950s. Opened to the public in 1960’s, it's a magical place where visitors can see, touch and step into the homes of fairytale heroes, villains and creatures that hold so many memories for all of us! The main trail of the grand forest provides the magical setting for over 350 jolly folk art figurines, BC’s tallest grandest treehouse that rises fifty feet into the forest canopy and a giant stump house with surprises around every corner.  Doris Needham was an artist in Revelstoke during the 1950’s.  She made unusual fairy tale figurines from cement by shaping her creations by hand, without the use of molds or forms.  Desiring to find the perfect setting for her handiwork, she searched for two years and finally chose this unique but isolated location between Revelstoke and Sicamous, BC.  This endeavour turned into a retirement project, which Doris and her husband Ernest named their “Enchanted Forest”. The Needhams were very isolated in those early years.  However, their love of nature and trust in God kept them at their chosen work.  During the next 10 years, they developed eight of the forest’s 40 acres, and purchased the property originally leased from the Crown. The trails were cleared by hand, their only tools being shovels, picks and a crosscut saw.  With a labour of love Ernest built the “Candy Cane” house in which they lived and constructed the rock walls along the property.  Utilizing the waterfall across the highway, a gravity water system was installed that is still in use today. On July 1st, 1960 The Enchanted Forest officially opened to the public. By 1970, one million people had enjoyed The Enchanted Forest.  The Needham’s even guided some visitors through at night by a lantern and began to realize that what they had created for fun and pleasure had become more than they could handle.  Retiring while still able to enjoy the fruits of their labours, the Needham’s sold their beloved forest.

The statues were really creepy..... the buildings were cute.... & way to over priced for admission!! Read more

Reviewed by
Tanya B.

For a family of four we paid just under 50$. I think this would be a great environment for families with children under the age of 7. The idea of the park is good... however the characters in... Read more

This place is SO cute, i would defiantly come back! My son who is 10 months old even enjoyed it, looking at all the figurines! Sure, the figurines may not be the cutest looking things, but oh... Read more