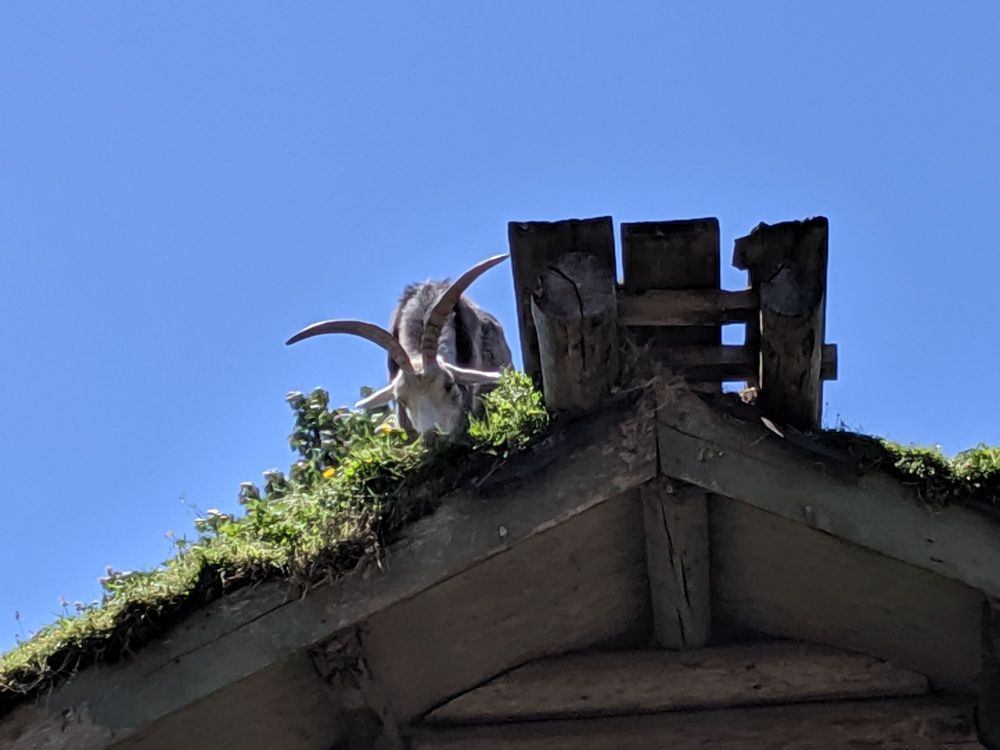 “goats on the roof!”

“What if…?” This simple question has been the steady compass and organic inspiration, guiding and shaping The Old Country Market from its beginning. In 1973, “What if we started a fruit stand beside the highway?” One year later, “What if we sold hamburgers to travelers en route to the west coast?” Two years after that, “What if we built a market?” A market was indeed built and that’s how this story began. Many questions and answers followed and the market evolved in its own inimitable way. The original market was created by Kristian Graaten. Kris and his wife, Solveig, emigrated with their children to Vancouver Island from Norway in the 1950s. Kris, who grew up in the small community of Lillehammer, was inspired to include a sod roof in his design of the market. Many Norwegian homes and farm structures are built directly into the hillside with the sod roof becoming an extension of the hillside. With the help of sons, Svein and Andy, and son-in-law, Larry, Kris unwittingly began to build what would become perhaps the most famous sod-roof building in the world. And now the question, “What if we put goats on the roof?” Well, it was the weekend of the Coombs Fall Fair and the grass was getting rather long. Legend has it that, after a few glasses of wine, Larry suggested that they 'borrow' some goats to ‘mow’ the grass and perhaps provide some entertainment for passing cars. Needless to say, the goats became permanent tenants of the Coombs market that weekend and have been there for more than thirty years. Each spring, a trip of goats makes their home on the roof, entertaining both locals and visitors from all over the world. Also referred to as a 'green roof', this environmentally friendly method of building provides insulation (retains warmth in colder weather) and promotes evaporation (has a cooling effect in the summer). But most importantly, for us at least, it creates a wonderful habitat for our goats.

Reviewed by
Jasmine A.

This summer, a friend invited my husband and I to spend a few days at her family's vacation home in Qualicum Beach. One of the places we visited was the "Old Country Market", also known as "Goats... Read more

THE BEST NANAIMO BARS! Unfortunately everything is fairly expensive. It was about $10.99 for 100g of smoked salmon. The Nanaimo bar was $2.99 and a slice of cake was $7.99. I got the carrot cake... Read more

Our favourite place to visit when on the island! Everything from the billy goats donuts, to the inside of the market is super delicious and fun. It's a unique experience as during the warmer... Read more